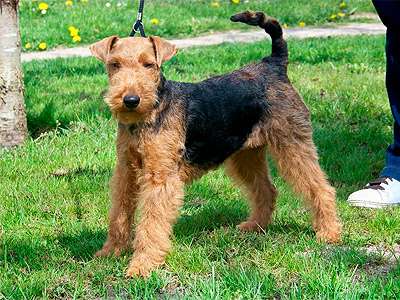 As the name suggests, the Welsh Terrier has originally been associated with Wales – although there is evidence to prove that he has historically lived in various parts of England as well, usually in the capacity of a hunter of foxes, badgers and the like. The Welsh Terrier – part of the larger Terrier breed – is famous for its energetic, social and companionable personality that makes him a great family pet. His temperaments may vary and they have been known to exhibit destructive tendencies in the wake of lack of consistent socialisation, but proper methodical training makes the Welsh Terrier a favourite with children and parents alike.

The Welsh Terrier normally has a life span of around 10-14 years and generally weighs up to 20 pounds or so. This is an average-sized breed with a height of 15-16 inches; the females are usually slightly shorter and weigh lesser than the male counterparts. The Welsh Terrier has two coats that makes him impermeable to rain to a large extent. The outer coat is tough and thin and the undercoat is soft and short. The Welsh Terrier is known for a single colour pattern, i.e. tan and black.

The Welsh Terrier is one of those breeds that can be somewhat difficult to train because they exhibit a fervent need for independence, coupled with frantic energy and constant sense of activity. On the flipside, a well-trained Welsh Terrier proves to be an enthusiastic animal whose very dynamic and animated disposition makes it a congenial pet, who generally lightens the atmosphere of any setting. This is quite a sociable breed and requires various toys to keep him entertained and busy when not in the company of humans or other dogs.

The Welsh Terrier is known to be intelligent and an excellent aid in search and rescue operations. He cannot be described as the most obedient, docile variety and will usually look for competitive stimuli – either man-made or natural. For this very reason, the Welsh Terrier is affable with kids and is notorious for making furniture – fragile or otherwise – his playgrounds. The Welsh Terrier exhibits acuity and is naturally of a protective nature; he is constantly on the alert and, therefore, prone to frequent bouts of incessant barking.

The Welsh Terrier can get accustomed to an apartment lifestyle with consistent training; but, in spirit, it’s a dog that requires more free space: perhaps a lawn or something akin. Usually, he sheds a minimum amount, but a substantial amount of grooming is required for the Welsh Terrier. Given their love for company and children, this breed makes for a good pet in a family with children. A hardy breed, the Welsh Terrier usually keeps in good health and is not easily vulnerable to too many diseases or ailments.

The Welsh Terrier demands fun, original and exciting training routines that are not monotonous or repetitive. He require at least 40-60 minutes of daily vigorous exercise; the best way to keep his energy contained is to allow a daily jog or walk. In addition to this, he exhibits high tendencies of prey-drive and, thus, should be leashed in public spaces. Crate training works for the Welsh Terrier, but only to an extent; he would prefer to be in open spaces with loved ones than the enclosure of a crate or a kennel. The dog needs feeding twice a day with good quality dry food and should be brushed at least once in a week to maintain hygiene.