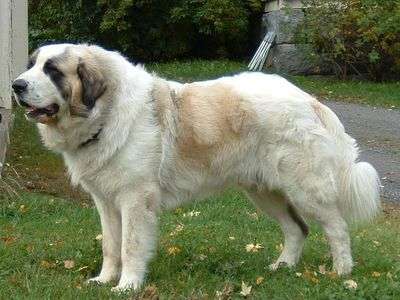 The highly intelligent Pyrenean Mastiff, originally a mountain dog from the Spanish Aragonese Pyrenees, is often confused with its close cousin the Pyrenean Mountain Dog or the St Bernard. Generally calm and gentle, this huge dog is a loving and devoted pet, and is also an excellent guard dog.

Like all livestock guardian dogs, the Pyrenean Mastiff combines qualities of gentleness so as to bond with the animals under its care, and ferocity in their protection. Besides these basic qualities, this dog has character by the bucketful – it's independent and self-reliant, calm and stable, smart, devoted, and full of fun. It's also serious about doing its job well, and has a big, deep, resounding bark to remind you that it's not going to be easygoing if you threaten anybody or anything it feels is under its protection.

The Pyrenean Mastiff is one of the big Molosser breeds, whose origins are lost in the mists of time. These dogs were originally bred as a livestock guardian dogs, to accompany herds of sheep and goats between summer and winter pastures, and to protect the herd from predators and thieves. They form a strong bond with the herd and won't hesitate to defend it fiercely.

In the seventeeth century, longer-coated dogs from the northern mountain regions of Spain with more white in their coats than their southern cousins were grouped together to form the Pyrenean Mastiff, while the shorter-coated southern breed became the Spanish Mastiff. Fast forward to the 1940s, and due to various geopolitical reasons Pyrenean Mastiffs almost became extinct. Fortunately for this wonderful breed, breeders in Europe stepped in and brought it back from the brink. The Mastiffs are very popular in their native Spain and other European countries, and are now being introduced as pets worldwide.

These dogs are giants. The minimum height for females is 72cm and for males 77cm, there isn't a maximum, and bigger dogs are generally preferred. The average weight is about 82kg, although males will often weigh in at more than 100kg. They're fairly square-shaped animals, and they have a thick coat, predominantly white, with large darker spots in shades of gold, brown, grey or black. The spots include a characteristic mask and patches covering the ears.

Pyrenean Mastiffs are generally healthy dogs, but they do have big appetites and a tendency to drool. Being long-haired, they'll need regular brushing, and the areas around the ears and eyes will need to be kept clean.

It's essential that these dogs are socialised from an early age. By nature they don't trust strangers, but they form strong bonds with people they know, and will become more trusting given the correct socialisation. Daily walks, and introducing them to the people and dogs you meet on the way, are a good way to effect this. Mental stimulation is also a necessity for these dogs, and walking them will keep them on the alert – even when they seem placid and relaxed, they know exactly what's going on all around them. Training should also begin very early, and be very firm but not harsh, utilising short and simple commands.