Livestream Sponzori Shop
Ahoj
Register to use all functions.
Detail 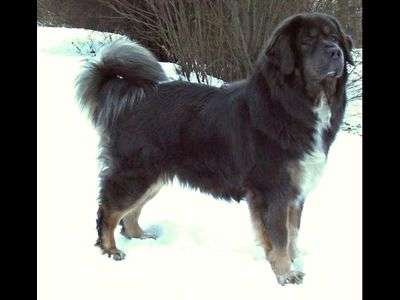 The beginnings of the Tibetan Mastiff or Do Khyi are believed to date back centuries, although no written records are left to actually prove its existence before the 19th century. Scientists link its DNA to dogs that lived in mountainous regions of Asia 5000 years ago. As its name suggests, the Tibetian Mastiff originated from Tibet, where it was developed as a guard dog on farms and for protecting property and livestock. Cynologists believe that its direct ancestors were Mastiffs and Molossers that populated large parts of Europe and were kept as war dogs in ancient Rome and other empires of that age.

Tibetan Mastiffs, as very impressive in size, were gradually used to also guard entire villages or settlements in the Himalayan mountains, as they were kept in confined spaces in the daytime and left to roam free at night. To enhance aggressive behaviour from an early age, the puppies were sometimes tied up and left. In the mid 19th century, the British started to show an interest in these quintessentially Tibetan dogs after Queen Victoria received one as a present during a state visit. Soon after, the British started to import them in large quanities, which led to their growing popularity as guard dogs and companions for people of the upper classes. Towards the end of the 19th century, the Tibetan Mastiff was well-bred and standardised. It wasn’t until the 1970s that the Americans also started to import theses dogs to the United States, the majority of them coming from India, Afghanistan and Nepal. While it became rarer and rarer in its homeland Tibet, the breed gained popularity in Europe and the US, before it was finally recognized internationally in 2006.

The Tibetan Mastiff is a giant dog of massive and sturdy build with heavy bones and a well-proportioned frame. The head is heavy and strong with a square mussle and long, V-shaped and hanging ears. With a shoulder height of up to 66 centimetres it can weigh up to 60 kilos, the males being much taller and heavier than the females. The medium-sized eyes, which can appear in different shades ob brown, are deep-set and almond-shaped. The tail is covered in feathered fur and is carried over the back and curled. The thick and long coat makes the Tibetan Mastiff resistent to the harsh weather conditions of its homeland, the mountainous regions of Tibet. The fur grows shorter on the head and into a big and long mane around the chest and neck. Different colours like black, red, brown or blue and markings in tan, white or gold are accepted.

Because of its long history as an independent guardian of property, animal herds and whole settlements, the Tibetan Mastiff is fearless and couragous while of a calm and well-balanced nature. It is a strong fighter that can easily beat wild predators like leopards, wolves or bears. As a very territorial and protective guardian as well as a devoted companion it needs a firm and consistent leader that trains it to prevent it from becoming a potential danger to strangers. As a family dog, it is loyal and loving, gentle with children and a quiet companion. It tends to bark only outside, while indoors it is calm and peaceful, quite inactive even. If socialized from an early age, it is absolutely fine with other pets, dogs and cats alike.

Due to its size, the Tibetan Masitiff should not be kept in a small apartment, but a large property with a yard or garden. It needs regular long walks to maintain its calm nature. While out and about it needs be kept on a leash and likes to walk close to its leader. Too much exercise in the early stages of its life could cause it to develop hip dysplasia. The thick fur needs a lot of attention, especially when the Tibetan Mastiff sheds lots of long hair after the cold season. Extensive brushing should therefore be part of the daily routine. The long ears are prone to infections and therefore require regular care and cleaning.