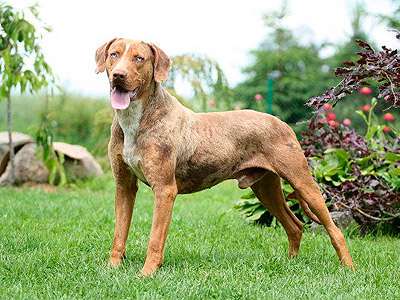 It is generally believed that the Louisiana Catahoula Leoparden originated from the Nordic Wolfhound around four hundred years ago. As the name suggests, the breed originated in the state of Louisiana in the USA and was designated the Louisiana state dog in 1979. It was named after the parish of Catahoula, which is situated in north-eastern Louisiana and was originally used to herd and round up cattle and feral pigs that had escaped. The dog worked in teams of around three to perform this highly skilled task, which required a large amount of speed and agility.

This breed features a deep chest with good lung and heart capacity as well as strong boned and solid legs. The coat is single and short and comes in merle or black and tan patterns.

The dangerous nature of the breed’s work as a herder or relatively wild animals means that it has a fearless nature and is hardy and quick witted. The breed works well with other dogs and is happy living as part of a pack, which means that it has a tendency to try to establish alpha status if not kept in check. Masters of this breed need to have a firm hand and an authoritative voice. The Louisiana Catahoula Leoparden is good with people as long as it is permitted to approach new people and smell them and thorough socialising is required from an early age. The breed reaches maturity at around two years. This breed can be fairly indifferent to children, so it should be introduced to children at an early age and children should be encouraged to play games with the dog.

This breed is prone to deafness in either one or both ears as well as eye problems like tunnel vision and hip dysplasia. Although the Louisiana Catahoula Leoparden can develop cancer in old age, it is relatively immune to most other diseases.

The Louisiana Catahoula Leoparden is accustomed to living outside and adapts well to different climates, although it will need to be provided with a dog house if it is particularly cold outside. The breed can live indoors if it receives plenty of exercise during the day, although it needs regular contact with humans and encouragement if indoors so that it does not feel abandoned and start to display behavioural problems such as destroying personal belongings and furniture.

In addition to long walks, this active breed enjoys a wide range of different types of exercise, including balling ball games and agility training. If the Louisiana Catahoula Leoparden does not receive enough exercise it will start digging and chewing, so it much be kept stimulated and entertained in order to avoid problems from developing. Only minimal grooming is required to keep the short coat looking its best. Bathing is only required around three times a year as the coat is odour free, while brushing should be performed around once a week. The nails need to be trimmed regularly, while the teeth should be brushed regularly to prevent tartar from building up. Although the Louisiana Catahoula Leoparden is a relatively light shedder, it will tend to shed more if it becomes nervous or stressed.