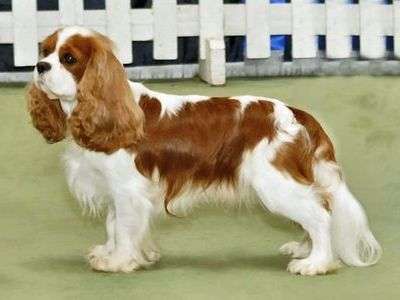 The Cavalier King Charles Spaniel is an active, graceful, brave dog with a joyful and sportive temperament. This toy spaniel can achieve a hight between 30 and 35 cm and a weigth from 4,5 up to 9 kg. The forehead should be flat, neither round, the ears are falling down and are richly haired. Its eyes are not too small and dark. The Cavalier King Charles Spaniel's body is square and the back straight.
Standard is: Lengths of the fan round about 4 cm, complete claw teeth and round paws. Profiting from the fact that its hair is beautiful, long, silky, but never curly (sometimes in waves), paws, breast and the tail's and are much more splendid, it is nice to look at.

The Cavalier King Charles Spaniel is present in four different variations of colour.
1. Blendheim: pearlwhite ground with some chestnut red stripes. The head's silhouette should be regular and shows a white blaze. The "spot", a dark point, big like a 1 Euro coin, on the forehead is wanted.
2. Ruby: chestnut red brown, always uni
3. Tricolor: three-coloured, pearlwhite with black stripes and red-brown points on the cheeks, on the inner ears above the eyes and at the forehead.
4. Black and tan: shiny black with mahagony-coloured sign at the fang, above the eyes, on the legs, breast, inner ears and under the tail.