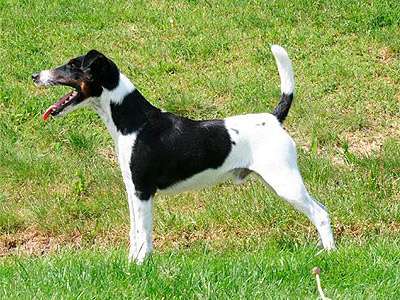 One of many terrier breeds, the Smooth Fox Terrier was nevertheless the first of the terrier family to be recognised by the Kennel Club. Typically, healthy Smooth Fox Terriers live between 12 and 15 years, and weigh in at between 6.8 to 8.6kg. Adult males measure approximately 36 to 39cm tall at the withers. Originally bred as a working dog, Smooth Fox Terriers are ratters by nature, and small enough to go to ground when hunting foxes- a trait which was bred into the earliest Smooth Fox Terriers in the 18th century. As well as being working dogs and hunters of vermin, Smooth Fox Terriers can make good companions for active owners. However, most Smooth Fox Terriers today are used as either show dogs or hunting dogs, rather than pets, but the breed is significant due to the large number of other terriers descended from it.

Smooth Fox Terriers are intelligent, and thanks to their working heritage, fairly easy to train. They can be considered yappy, but they can still make suitable pets due to their small size and friendly natures. However, they need to be socialised with other household animals from an early age: if this is not done properly, owners will not be able to trust them with other animals. It should also be noted that this particular breed needs to be kept a close eye on, because due to their scrappy natures, Smooth Fox Terriers will pick fights even with much larger dogs.
Smooth Fox Terriers need to be properly contained and kept on their lead in public areas, due to their propensity to kill other non-canine animals, particularly rabbits, squirrels, ducklings, pigeons, rats, mice, and small pets. Their hunting instinct is strong, and they have a tendency to wander: they can easily dig and jump their way out of unsecured yards. This same vermin-hunting instinct prompts them to dig, too, so garden fences should be properly maintained and reach below the soil surface to a depth of approximately 30cm.
Because Smooth Fox Terriers are strong, active, energetic dogs, they need between 30 and 45 minutes' vigorous exercise a day: if they don't receive this, they can become nuisance barkers, or act out in destructive ways in the home.
Smooth Fox Terriers are intelligent, but they can be willful creatures, which means that initial housetraining can be difficult. For that purpose, crate training is recommended.

Most breeds of pedigree dog suffer from some kind of genetic health problems due to inbreeding: the Smooth Fox Terrier is no exception. Deafness is known to be a problem in predominantly white dogs, and the breed is prone to mast cell tumours. Smooth Fox Terriers can also suffer from cataracts, Legg-Perthes Disease, lens luxation, and Canine Hip Dysplasia. If these problems are known to be present in individual dogs, they should be prevented from breeding.

Smooth Fox Terriers have short coats which are easy to maintain, although they do require weekly brushing: this will help prevent problems with shedding, and an annual trim is recommended to keep coats smart and healthy. Most of the dogs have white coats, with black or brown markings. The nose is black, and Smooth Fox Terriers have small, V-shaped ears which drop forward to their cheeks. Smooth Fox Terriers also have dark eyes, and tend to have white bodies with a solid coloured head, although the breed standard allows for blazes and half or split faces.