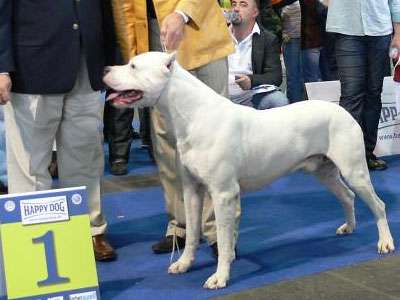 The Dogo Argentino is a mastiff-type dog developed in Argentina in the early twentieth century. The Dogo Argentino is tall and muscular, with a powerful jaw, and was traditionally used in the Pampas for hunting wild boar and puma. Despite its remarkable physical performance and impressive stature, the Argentine mastiff is easy to educate and barks little, making it a dog suited to family life.

In early twentieth century Argentina, hunting was very popular: it was a hobby for the rich, and a livelihood for the poor. In 1928, Antonio Nores Martinez, a medical doctor, surgeon, Professor, and founder of the breed, combined the qualities of the Perro de Pelea, a dog breed famed for its fighting abilities in Córdoba, with a range of other breeds, with the aim of improving size and physical strength.

It was not until the 12th generation that Martinez got a litter of six dogs considered pure breed. This new breed was recognised by Royal Canin Argentina in 1964. The basis of the breed was the Pelea, along with German Shepherd, Pointer, Irish Wolfhound, Great Pyrenees, English Bulldog, Mastiff, Bull Terrier, and the Boxer. Moreover, the breed was specifically created white to differentiate it from the game it hunted.

The Dogo Argentino can be used as a dog guard. Courage, balance and intelligence are qualities that predominate in this breed. Selected to hunt big Argentine game, it is characterised by an indomitable courage and a predisposition to fight to the death. Moreover, due to its ancestry, the Dogo Argentino inherited a remarkable psychic balance and a keen intellect, while maintaining its power.

The Dogo Argentino can coexist harmoniously with horses, cows and domestic animals. Socialisation between males is important because the Dogo tends to not get along with other dogs. The Dogo is a very affectionate dog to his master and the other members of the family. It is amenable with friends of the family, but a simple look can cause fear in an approaching stranger. Because of its power and strength of character, The Dogo Argentino needs excellent and continuous training. This is a dog that can be very dangerous to other animals and humans if it is put in the hands of inexperienced or irresponsible owners.

Large, white, short-coated, with a very muscular, strong body that very rarely has markings (any marking or spot on the coat is an imperfection). Measured at the withers, the height ranges from 60 to 69 cm for females, and 60 to 76 cm for males. Weight ranges from 40 to 55 kg. When viewed in profile, the skull is domed, and the muzzle is higher at the nose. The body length is slightly longer than the height, and the female may be longer in the body than the male. Measured from elbow to ground, the front leg length is roughly equal to half the height at withers. The tail is low set, and thicker at the base, tapering to a point. The Dogo Argentino has been described as similar in look to an American Bulldog, only much taller and with a completely white coat.

As with the Dalmatian, the white Bull Terrier and the white Boxer, the Dogo Argentino may develop pigment-related deafness. Overall, there is the possibility of approximately ten per cent deafness, with some Dogos afflicted in one ear, and some in both. Deafness is reduced dramatically if the breed stock used has normal hearing in both ears. Hip dysplasia may also be a common concern.