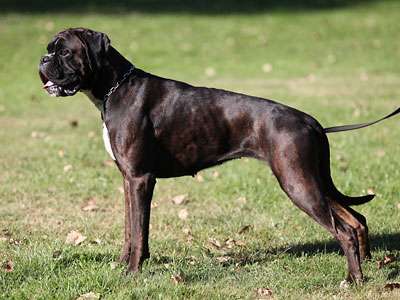 The Boxer is a popular breed of dog that traditionally features a docked tail. However, the process of docking the tail is largely outlawed in much of Europe these days, although breeding clubs such as the American Kennel Club penalise a natural tail in this breed.

The Boxer breed was developed in Germany back in the 19th century and its ancestors are two German types mastiff type dogs, namely the Barenbeiszer and the Bullenbeiszer. These breeds were later crossed the Mastiff and Bulldog. Boxers were originally used for bull baiting, dog fighting, cart pulling, to round up livestock, and as cattle dogs. In later years the Boxer was used in the theatre and the circus, while the first Boxer studbook was established in 1904.

The Boxer features a compact and powerful body and the head of the breed should be in good proportion with the body. The Boxer features a blunt muzzle with a distinct stop, while the nose is large and black and boasts prominently open nostrils. The breed has an under bite, while its eyes are dark brown. The ears are set high and are either cropped or left natural. The ears are thin when they are left natural and lay close to the head. The front and back legs are muscular, strong and straight, while the Boxer’s dewclaws are usually removed. The Boxer has a short and smooth coat that fits close to the body and is usually a combination of fawn, tan, mahogany and black with white markings. In some cases the Boxer may also have a pure white coat.

The Boxer is naturally a happy dog and is playful, curious, high-spirited and energetic. The breed is extremely intelligent and quick to learn new tasks and is prized for its competitive obedience. The Boxer bonds with humans quickly and is loyal and affectionate, which makes it an excellent family dog. Boxers get along with children particularly well and their good-natured temperament makes them good companions for young children. If introduced at an early age, Boxers relate well to cats as well as other types of household pets, although they may attack rodents and chickens if not trained properly. The Boxer requires a lot of attention and can become bored easily if ignored.

The Boxer has a tendency to suffer from heart problems such as cardiomyopathy as well as thyroid and sub-aortic stenosis. The breed can be prone to skin conditions, epilepsy and cancer. Boxers are known to drool and snore in their sleep and diet control is essential in order to prevent excessive flatulence.

Boxers are temperature sensitive and they tend to become cold and overheated quickly. For this reason, a controlled environment is essential and they should sleep indoors if possible. The breed is fairly active and needs a large amount of room to run around in such as a yard during the day, although they can live in an apartment if they receive plenty of exercise.

The Boxer requires daily exercise such as long walks and playing ball games outside. Its short fur is easy to groom, although grooming and bathing should be kept to a minimum to avoid essential oils being removed from the skin.