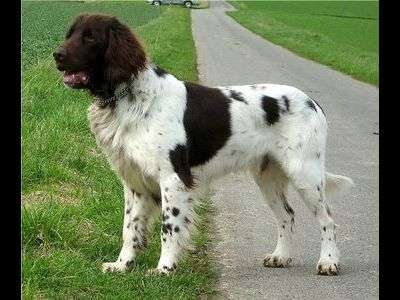 German longhaired pointer, known better by its initials GLP, is a breed dog breed closely related to German Shorthaired Pointer (GSP). As its name suggests, the German longhaired pointing dog was developed in Germany and was used majorly as a pointer. The original breed was quite slow, temperamental and stubborn. These undesirable qualities were done away with in the 19th century when it was crossed with English pointers. This crossing had the desired effect of increasing its speed as well as developing in it a friendly and steady temperament. When it was decided that GLPs could only be white-and-brown, other breeds were developed from the GLP that were of different colours. For example, the ancestors of the Large Munsterlander are GLPs that were of black-and-white strain.

The German longhaired pointer is very muscular, athletic and elegant. It is, however, not bulky. Its weight is around 66 pounds (30 kilograms). Its length ranges from 24-28 inches for male and 23-26 inches for females at the wither. It moves very fast and with a lot of freedom. Just like their cousin, the German shorthaired pointer, the German longhaired pointer has webbed feet. When moving around, their strides are long and are made with a lot of freedom.
Its coat measures about 1.2 to 2 inches long on the body. With feathering, the coat is usually longer. The coat is firm, slightly wavy and shiny. Its undercoat is dense but not so dense as to prevent guard hairs from standing out from the body. The coats colour is solid liver. It is white along the chest and paws. It is also white at the top of the muzzle. At the head, back, ears and base of the tail it has large patches of solid brown.

The German longhaired breed is gentle, intelligent, friendly and kind. They show a lot of affection to their family members. When separated from these family members, they often experience separation anxiety. Unless they get exercised properly, they make poor pets. This is because of their energetic and aggressive nature. However, when properly exercised, they make some of the best pets because really enjoy playing around with children. They are also a very social breed- they easily interact with other dogs.

The GLP is easy to train. It is also very hardworking and energetic. As such, they need a lot of daily exercises. A daily long walk with the owner is enough but if more energetic exercises can be performed the better. Since GLPs are very active and energetic, they need a lot of room to run around in. That is why they are unsuited for urban life. Rural areas form their ideal setting where the owner takes it for hunts regularly. Grooming should be done at least once every week. As for their health, GLPs generally have a robust health. Unlike German shorthaired pointers, GLPs are quite rare. This makes them unprofitable to irresponsible breeders who are often responsible for most of the genetic disorders that affect many dog breeds. For this reason, they don't have any genetic disorder. As far as their health is concerned, their Achilles heel is their ears. The ears are prone to many mild infections if not taken care of well. Fortunately, this can be avoided by regularly cleaning the GLPs ear. This cleaning should also be done immediately after swimming.
The GLPs high intelligence, athletic traits and ease of training makes them one of the best dog sports. Well-trained and taken care of, they will prove a wonderful dog to have around in the home.