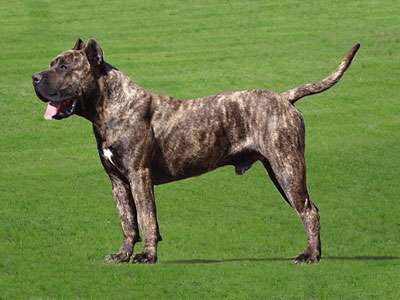 Anyone considering owning a Dogo Canario needs to be completely sure of their ability to exceed this breed’s level of confidence. Having this much power at the end of a leash is an awesome responsibility that demands a complete commitment to comprehensive training and leadership, and paying sufficient attention to this powerful animal’s particular needs.

At a height in the 23 to 26 inch range and a weight of around 126 pounds, the body of a Dogo Canario is thick and powerfully muscular with a length that exceeds its height. The shoulders are slightly lower than the rear, which gives it a defensive posture, but the breed’s most imposing feature is its formidably large head. Broad and square shaped, it has jaws that are deep and powerful and eyes that are ever alert and watchful. Its coat is short and usually coloured black, brindle, fawn, or a combination of these. The powerful attributes were necessary for the original purpose to which this dog was bred, which was controlling livestock and chasing off any threat.

The Dogo Canario is constantly alert and ready to protect itself and anyone to whom it has bonded. It is extremely loyal and courageous and will never shy away from confrontation, which can also be a dangerous combination if this animal has not been socialised well and has not been trained to control its natural instincts. Failure to do so has resulted in well-publicised tragedies that have given the Dogo Canario a, mostly, underserved bad rap. Uncontrolled aggression can generally be blamed on poor ownership, rather than on this dog’s nature.

It should always be remembered that the Dogo Canario is a powerful animal with powerful instincts; one of which is to be dominant. Only the strong-minded who have a clear understanding of the alpha dog need apply as challengers. This dog will check your résumé and pedigree for any hint of weak or indecisive genes before it will consider surrendering, and even if it finds its owner credible, it will always want constant and very firm reassurance that nothing has changed. If it is to be part of a family, then every member of that family will need to display their credentials. It is, therefore, not the ideal pet for small children, but win it over and this breed will swear allegiance for life.

The Dogo Canario is the perfect candidate for puppy kindergarten. It needs to be socialised early on, so that it learns to be accepting of strangers and other animals. However, it will never be the kind of dog that becomes welcoming enough to lick the faces of visitors. It was intended to guard, and that will always be this dog’s focus. With its need for regular exercise, the Dogo Canario should be taken on long, leashed walks, which are further opportunities for getting it accustomed to people outside of the home and to reinforce its obedience training.

This breed should never be exposed to aggressive methods of training. However, making it sing for its supper generally works well. It thrives on activity, so that a system that rewards it for effort also helps the dog to expend some of that awesome energy. The Dogo Canario does not enjoy lazing around with nothing to do. Boredom can lead to it thinking up some games of its own and that can never be a good thing. Owners will win this gladiator’s heart and trust by displaying their own courage, and will be richly rewarded with loyalty and respect.